Following the award-winning Narvik,  and Box of Tricks’ recent acclaimed productions of Plastic Figurines and SparkPlug, comes Under Three Moons, Daniel Kanaber’s new play that explores how men relate to each other today, who they are and how they live – and the spaces between.

Spanning half a lifetime, Under Three Moons takes place on three nights across three decades of two friends’ lives. From a school trip to France as teenagers, to a surf shack in their twenties, to Christmas in their thirties, Mike and Paul meet up and talk into the night. From boyhood to manhood to fatherhood, these are the nights they share.

Playwright Daniel Kanaber has had plays performed across London and in festivals in America, Canada and Croatia. His first full-length production, Shiver, ran throughout February 2014 at Watford Playhouse. He was selected by High Tide to be part of their Escalator scheme; an early extract of the play was performed at High Tide Festival 2015. In 2011 his play Heart in Mouth was toured by Box of Tricks.

Kanaber said about his new play:
“Under Three Moons is about a male friendship, two men growing together, a relationship that’s close but often unarticulated. And how that lack of lack of direct expression can become the defining trait in a life.

“But it’s also about society’s shifting view of male identity, how we’ve gone from talk of ‘lad culture’ to the ‘metro-sexual’ and now ‘toxic masculinity’. Male mental health has become much more understood if not discussed enough. The way men relate to their friends and to themselves, is complicated and emotionally obtuse. At least I know I can be.

“I suspect how my friends will respond. Love it or hate it, they’ll rip the piss, and then never discuss how they felt about it. Coz anything else would be awkward or uncomfortable. And that’s what I wanted to write about, how men learn or try to unlearn this emotional obliqueness. And how despite it, there’s a tenderness in it too.”

Director Adam Quayle added:
“Every so often, a play comes along that resonates absolutely. For me, Under Three Moons is one of those plays. Unassuming yet truthful, it’s a beautiful, nuanced piece of writing that perfectly captures the shifting sands of male friendship. At turns funny and tender, the play explores how two men relate – or rather fail to relate – on three nights across three decades. Quietly, it asks big questions: how to live a life, how to be a good man, how to reach out to others. The big stuff we all face. Addressing everyday mental health indirectly, it asks what impact men’s emotional inarticulacy has on their lives and their relationships. In a sense, Under Three Moons is a platonic love story where neither of the characters can say how they really feel. I can’t wait to share this funny and moving story with audiences.” 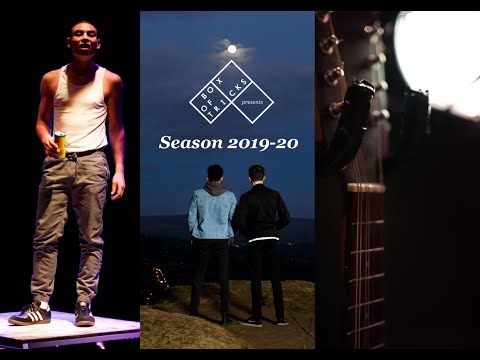 Work with us! Box of Tricks is looking for an Audience & Marketing Associate…
Casting Announcement: Under Three Moons